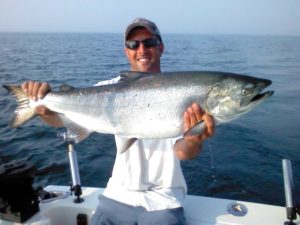 King salmon roaming the off-shore waters of Lake Ontario near Sodus Bay are hitting the scales between 25 and 35 pounds. They are in the feeding frenzy mode and are packing on the pounds before the autumn staging process, making for amazing summer salmon fishing on Lake Ontario.

The adage “the proof is in the pudding” would apply to the salmon fishery at the center of Lake Ontario. Year after year records are set from teams fishing the Wayne County port of Sodus during the Lake Ontario Salmon and Trout Team Tournament Series. (Pro-Am)

Local Charter Captain Ryan Williamson took first place in the Wayne County Pro-Am in 2006, third place during the 2008 event, and finished third during last year’s Pro-Am. Williamson operates his Fishin’ Magician Charter service from Sodus Bay, and touts his simple program for consistently putting trophy kings in the box. “I use a couple of Dipsys and a couple of riggers, when salmon fishing on Lake Ontario” the captain said. “And if something’s working I will key in on that one bait and load the spread the same.”

During the summer months Williamson said the salmon are on the move. “In a typical year Sodus is right in the middle of the salmon’s migratory path,” he said. “They are eating machines and this is the time of year where they are packing on the pounds.”

When Salmon fishing on Lake Ontario during the summer months, Williamson prefers flasher fly or cut bait programs. “Cut bait has been very productive the end of July and the first weeks of August. They appear to like the meat. If they want it I give it to them.”

Like many charter captains fishing Lake Ontario, Williamson is also an advocate of the copper running rigs. He has been known to send back 600 feet of copper behind is 31-foot North Coast boat. “It keeps my presentation away from the boat, and I know exactly the depth of my set-up,” he said. “If I’m back 100 feet with copper, it’s down 20 feet. If I’m behind the boat 600 feet, I’m down 120 feet. I like to call running copper… precise and consistent.”

An added piece of equipment for the copper running captain is his new electric reels. “The days of cranking copper are over,” he laughs. “I am now using Diawa-Tanacom Bull electric reels. I don’t have to crank in 600 feet to change my set-up.

“Copper shouldn’t be feared. Your customers can have the choice of having an electric reel assist them, or they can crank like a regular reel.”

Williamson gives his clients action-filled days salmon fishing on Lake Ontario that run 30 to 35 pounds, however the captain believes his home port completes the fishing experience. “Sodus Bay and especially Sodus Point is a great fishing port,” he said. “I don’t have to go far for fish. Very seldom do I run over five miles. “And after a day fishing, there are plenty of activities and restaurants for my clients. My customers love Sodus Point.”

The forty something year-old captain has been chartering on Lake Ontario for over twenty five years, however, he has been fishing since he was twelve. “I have probably mated and worked for at least 40 captains between here and Florida,” he said. “You know…I have picked up a lot of information, but you learn every day.  You need to keep your mind open.”

Captain Ryan Williamson can be reached at 585-749-6179. The Fishin’ Magician boat is docked behind Captain Jack’s Goodtime Tavern on Greig Street Sodus Point.

Chris Kenyon is an outdoor columnist for the Sodus Record-Sun and the Finger Lakes Times.  He is a member of NYSOWA and AGLOW professional writing organizations and freelances for several publications.  He is also the Outdoor Recreational Coordinator for Wayne County Tourism.