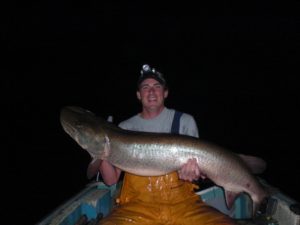 Luke Seymour caught and released this 54 inch St. Lawrence muskie shortly after a July thunderstorm passed through the area while night fishing for summer muskie.

Muskie enthusiasts agree that the fall months offer the best fishing of the year, and I won’t attempt to dispute that point because the largest muskie ever taken on my boat was a catch-and-release monster muskie that struck in mid-November.  Still, I have caught more muskies in July in New York than any other month. The explanation for my summer muskie fishing success is quite simple: night muskie fishing.

Night fishing offers musky fishermen a number of advantages over daytime fishing. For one thing, as the summer sun descends on the horizon, muskies tend move shallower to river structures in search of favorite prey such as walleyes, suckers, and bullheads, three species that become active in low-light conditions. Because summer muskie are in a prowling, feeding mode during the evening hours, the fish are more likely to strike an angler’s lure at this time.  In addition to producing muskie, night fishing outings in the summer also offer the opportunity to catch big northern pike and walleyes. In fact, pike over 30 inches and walleyes approaching 30 inches are fairly common.

Because of the St. Lawrence’s ultra-clear water, terminal tackle is likely a deterrent to muskie strikes during daylight conditions. A great musky fishing tip is to fish at night. Darkness reduces if not eliminates the visibility of snaps, leaders, and weights to a following muskie. Night musky fishing, too, eliminates most of the boat traffic in muskie-holding areas. For summer recreation, it’s hard to beat the relaxation of those cool, evening hours spent trolling for muskies. Although not associated with nighttime darkness, another advantage of mid-summer outings is the lack of floating weeds. Such weeds can be a real problem in late summer and early fall as water levels drop and weeds deteriorate and float to the surface.

Telemetry studies on St. Lawrence River muskies indicate the fish are extremely migratory after the spawn and again in the fall. In contrast, the nice thing about summer muskie is that they become residents of a given area and that particular area will likely hold fish year after year; so once you discover a summer spot, you can expect it to yield muskies on future outings.

An abundance of structure characterizes the typical summer muskie haunt, and the best structures will have quality cover and prey as well as adjacent deep water. Prime structures to find muskie include shallow areas like shoals, points, weed edges, and necked-down areas such as a gap between two shoals, weed-beds, or islands. For the most part, muskie-producing spots along the river are pretty well known. If you are unfamiliar with an area, a visit to the local bait shop will get you headed in the right direction.

Moon Phases and Storms Passing Through

If moon set or moon rise occurs around sunset, your odds of hooking a muskie increase significantly. The very best odds for summer muskie night-fishing success, though, occur when anglers wait till those hours just prior to and just after a fast-moving thunderstorm passes through the area. Of course, safety is the key issue here, and you must be off the water during the actual storm.

Most anglers can catch St. Lawrence River summer muskie by casting to, alongside, and over structures, but trolling is the time-proven technique for success no matter what the time of day. While some anglers use oversize spinning outfits, bait-casting rigs are the norm on most boats. I like to use non-stretch lines and fast-action rods because that combination allows me to both “feel” and see that my lure has good action.

Lure depth is critical for anglers when trolling for muskies, and many anglers can use a combination of line, in-line weight, lure type, downrigger, etc. to get their lures to the desired depth. For the most part, night trolling means working those lures in water depths from 16-35 feet. Lure action, too, is critical for success. A slow, wobbling action generally produces best while night fishing; but still, an angler wants to periodically impart erratic action to his lure, a technique that often induces a strike.

Among the most popular trolling lures are the Cisco Kid, Swim Whiz, Believer, and Depthraider. All four lures are deep divers, track well at varying speeds, have a natural swimming action, emit an attractive vibration, and are moderately priced. The Believer and Depthraider also make a rattling sound.

Natural colors such as black and silver, dull perch, and black are the favorites of river musky anglers. The general guideline calls for using dark lures on dark nights and brighter lures, such as ones with silver or white, on bright nights. If I had to choose only one color for all musky fishing conditions, it would be black and silver.

Like all outdoor ventures, night trolling calls for safety first. Be sure to tell someone where you are going and when you expect to return when you go nighttime muskie fishing. Make certain your boat lights work and all safety equipment is on board and in good-working order. Too, make sure you have a fishing partner along to assist with the landing, unhooking, photographing, and releasing of your summer muskie.

Captain Mike Seymour is a licensed Coast Guard Captain and NYS guide who guided extensively on the St. Lawrence River, Black Lake, and western Alaska. He is a member and former president of the New York State Outdoor Writers’ Association and is an active writer for several publications. In addition to fishing the St. Lawrence River, he is actively fishing Lake Ontario, the Adirondacks, and the other waters of the state.