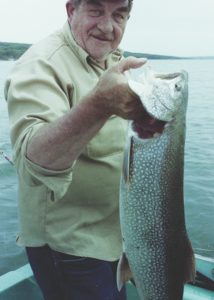 Lake trout are one of the most sought after game fish species in the Finger Lakes region of NY and can be found in eight of the eleven lakes. Summer lake trout fishing in the Finger Lakes is an excellent time of year  catch trout from these fisheries. Some of the lakes produce large fish, while others have greater numbers of fish. Cayuga and Seneca Lakes are the best fisheries to catch a large lake trout. Anglers looking for numbers of fish should try Skaneateles and Keuka Lakes.

During the summer it is usually necessary to fish in deeper waters for lake trout, sometimes as deep as 100 feet or more to reach the cold water they prefer. There are various methods used to fish for lake trout in the Finger Lakes, the three most used, particularly in the summer: trolling, vertical jigging and fishing with natural bait.

Trolling is probably the most popular fishing method for lake trout and there are several different trolling techniques. Trolling with copper has been used to catch trout for decades on the Finger Lakes. The traditional method of using copper, called “pulling copper,” was hand-lining without a rod. You held the copper line in your hand, pulled your hand up until your arm formed a right angle at your elbow and dropped your hand back until your entire arm was straight. Traditionally, people also used a home-made trolling box with an old record player mechanism that would wind their line. Many fishermen today, however, troll with the copper line spooled on a level wind reel and a downrigger-style reel.

Downriggers are by far the most common method used for fishing for lake trout on the Finger Lakes. The advantage of using the downrigger is being able to put your lure to be fished at a precise depth. Dipsy Divers are also used as a trolling technique. They are devices that are attached to your line that get your lure down deeper in the water. For those that don’t want to spend the money on downriggers or avoid the extra work in using downriggers you should consider use Dipsy Divers as an inexpensive and efficient way to fish deep water. They are also a great alternative for beginning trollers.

In recent years, vertical jigging from a boat has become a very popular fishing technique for catching lake trout in the Finger Lakes. Many fishermen and women actually vertical jig by dropping their jig to the bottom, raising it up a few feet and then bouncing or “jigging” it up and down. However, the most popular method is to lower the jig to the bottom, raise it off the bottom a couple of inches and jig it a few times, then crack it towards the surface for some distance before dropping it again and repeating the process. On the retrieve, vary your speed by cracking fast then slow and even pausing for a while. The best vertical jigging lures for lake trout feature ½ to 1- ounce jigging spoons and lead head jigs rigged with plastic baits such as flukes, twister tails, tube jigs and swimbaits in white or chartreuse or white bucktail jigs.

The use of natural bait (live bait or dead bait) is another method that has been used to fish for lake trout on the Finger Lakes for decades. The most popular bait used is alewives (called sawbellies or mooneyes). But, minnows, smelt and stonecats have also been used to catch lakers. Natural baits are generally fished on the bottom with the use of an egg sinker, however they can also be fished anywhere in the water column.

The following are some of the best locations on the various Finger Lakes to use these trout fishing methods.

Skaneateles Lake, according to J. Michael Kelly, author of the book, Fishing the Finger Lakes, “has immeasurable numbers of lake trout which are generally grunts, but occasionally grow to gargantuan length and weight.” There are no smelt or alewives in Skaneateles and the trout feed on spot-tail shiners less than 1 ½ inch in length. Kelly recommends using small flutter spoons, wobblers, or needlefish. In mid to late June trout will generally be found in 70 to 140 feet deep and are commonly taken by trolling with downriggers or Seth Green rigs.

When you’re on Owasco Lake, you should troll for lakers at a depth of 90 to 150 feet of water during the summer months. Some people have also found vertical jigging very effective for catching lake trout on this lake.

Although trolling with downriggers or Seth Green Rigs are the most popular techniques used in the summer months on Cayuga Lake, more fisherman are trying vertical jigging. Some anglers are still pulling lake trout off the bottom of Cayuga Lake pulling copper. According to Steve Williamson at Bears Bait and Tackle in Trumansburg, NY (607-387-5576) his favorite spot to pull copper in June is in 40 to 50 feet of water off the Sheldrake Point area. He moves out in deeper water (out to about 100 feet of water) as the trout move out to colder water. Williamson says the areas off Milligan Station and Long Point are two good fishing locations to troll for lake trout as well. Later in the summer Williamson recommends jigging the deeper water with white bucktail jigs or fluke-like spoons. Cayuga Lake offers a variety of fish species, lake trout are among the most fun to catch.

Referred to as the National Lake Trout Capital of the World, Seneca Lake is where anglers use a diverse array of lures and techniques to catch lake trout. It varies from trolling in the thermocline with down riggers or Seth Green rigs, to pulling copper, to using vertical jigging, to using natural bait. The thermocline in Seneca Lake is usually set up by early July and the lake trout are temperature oriented and spread out over the lake in search of their preferred water temperature, which is between 40 to 50 degrees. Some of the best areas for big lakers include the steep contour between Hector Falls and Glen Eldridge Point, the area off Lodi Point, and also Sampson State Park. Larry Japp, owner of Roy’s Marina in Geneva, (315-789-3094) says the area from Kashong to Glass Factory Bay has been producing some large lake trout. According to Japp, more people are making fishing simpler and less expensive by using Dipsey Divers in lieu of downriggers and Seth Green rigs. Pam Armitage, of Brewer’s Sporting Goods in Ovid, (607-869-5890) says the stinger spoon is the new hot lure for lake trout.

In Keuka Lake, lake trout will usually be found during the summer at a depth of 40 to 70 feet down where the water temperature is between 45 and 55 degrees. Downriggers are the most popular method for taking lake trout, but a few avid fishermen use a completely different technique. Some of the senior fishermen will fish after dark with live bait and lure school of alewives to their boat with the light from lanterns which draw in the lake trout.

From early June lake trout in Canandaigua Lake can be found in or near the thermocline in about 50 feet of water. Canandaigua Lake depth  reaches 276 feet along its 35.9 miles of shoreline. Downriggers are recommended for consistent lake trout action using spoons or stickbaits. Theresa, from the Bait Barn in Naples (585-374-9765), recommends trolling near Walden Point and the White Rock area on the south west portion of the lake and jigging with white bucktail jigs or Sutton spoons off the Vine Valley area on the east side of the lake.

Canadice Lake provides folks with the opportunity to fish deep water for lake trout from shore. The ledges along the west shore and the points from the east bank plunge to 50 or 60 feet, which creates structure that attracts baitfish and consequently lake trout. You’ll have to make very long casts using heavy lures or bait rigs with one-ounce slip sinkers. Boats on this lake are restricted to maximum length of 17 feet with an outboard motor no more than 10 horsepower. From early June throughout the summer, you should start trolling at 20 to 25 feet down to find the lake trout.

Trolling the center of Hemlock Lake with downriggers or Seth Green rigs near the lake bottom will ensure you catch lake trout during the summer. However, it is recommended that people continue to watch their sonar screen from their boat for lake trout that may be suspended in 30 to 40 feet of water.

Other Fish Species in the Region

Some other shallower waters species to keep an eye out for while you are in the area include: yellow perch, northern pike, both smallmouth and large mouth black bass, walleye, chain pickerel, tiger muskies, panfish, brown trout, rainbow trout, and Atlantic salmon.

If you haven’t experienced the excitement of landing a lake trout from one of the Finger Lakes, this summer is the time to plan your fishing trip and give it a try!  Don’t forget to bring your preferred bait, and fishing license with you, and enjoy the fisheries that the Finger Lakes region have to offer! For more information on fishing the Finger Lakes go to the DEC website.