Northern Pike in the Fulton Chain of Lakes

The entire Fulton Chain of Lakes was once prime water for rainbow trout, landlocked salmon and lake trout fishing for a number of years. The lake trout were contaminated with DDT once commonly used for control of black flies.  Thirty years later this chemical is still in the water and in the lake trout in Fourth Lake.  This is why the DEC advisory says to eat none of this species. There has been little or no natural reproduction of lake trout in these waters.

The Introduction of the Tiger Musky

In 1990 DEC Region 6 Fisheries decided to put tiger muskellunge in First Lake to control the golden shiner problem.  The tiger muskellunge loved it and grew very fast, up to 12 and 15 pounds in five years.  They also moved all the way through the chain to Fifth Lake.  Some even went downstream over the dam at Old Forge and were caught down the Moose River. These fish were hybrids and would not reproduce so the population would die out in seven or eight years if not re-stocked.

The DEC still stocks 2,800 10 inch tiger muskellunge in First Lake each year.  These species were fairly easy to catch by both summer and winter fishermen when they were smaller, but the big ones were tougher to catch.   A few fishermen figured out how to catch the big ones during the summer by using big noisy top water plugs and spinner baits after dark.

Unauthorized Northern Pike in the Fulton Chain of Lakes

A few of the local fishermen who fished northern pike in some of the nearby local lakes decided that if DEC can stock tiger muskellunge why not put in a few northern pike.  What’s it going to hurt?  Well these pike aren’t sterile and they started reproducing and the population took off.

The pike overpopulated where they were put in, and they also moved through the Fulton Chain of lakes all the way to Fifth Lake.  They had no competition so they grew very fast. The introduction of pike in the Fulton Chain has pretty much have eliminated the forage fish species in First, Second Lakes and Old Forge Pond so now they are eating each other as well as the tiger muskellunge that are stocked each year right where the pike population is the greatest.

The Pike Take Over

Other species anglers pursue, like rainbow trout, and salmon are still stocked in parts of the Fulton Chain of lakes, giving these pike some more food to eat.  You don’t hear much about any tiger muskellunge being caught anymore, but pictures of big pike in the Fulton Chain of lakes are in the local papers all through the summer months.  Many of these are taken right off the waterfront in Old Forge or off docks along the Fulton Chain of Lakes. Some of these pike are now 20 pounds and larger so you had better have some good tackle when you go fishing or they will break you off. 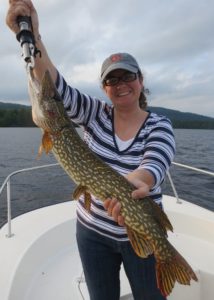 One local woman, Claire Hayes, has been pretty lucky while fishing for pike in the Fulton Chain of Lakes. A couple years ago she went out one morning with Kerry Rogers and landed several nice larger than average northern pike.  The largest was 33 inches and she was a pretty happy fisherwoman.  Then the next year she went out fishing with Kerry again and landed two monsters, the first weighing about 15 pounds, and then only a few casts later she got one that weighed 19 pounds.  She was pretty happy with that catch as any fisherman would be, and now she has to go out and just get one that’s bigger. They are out there for sure.

Kerry told me that the best northern pike fishing lures are imitation swimming frog or mouse top water lure. Rapala imitation perch or smelt stickbaits also work well for northern pike fishing lures.  He uses a steel leader or 50 lb. Power Pro line as a tippet.  He said the truth is pike would probably eat a beer can if you put it down there for them!

Summer in the Shallows

Since pike are a warm water species, they can hang out in very shallow water all summer.   I’ve spooked them many times while checking on the local loon population way back in the bays on the Fulton Chain of Lakes.  These big fish would be laying in ambush in shallow water, and when I would go by them, they would make a big swirl to get away into deeper water.

The Early Bird get the Pike

The best time for anglers to try for them is early in the morning before there is much boat traffic out on the water.  Most mornings you will have the lake to yourself. These monsters can eat a small duck or baby muskrat off the surface of the water in one gulp, so think of that size when you are selecting your northern pike fishing lure.

Heavy Duty Gear is a Necessity

Many years ago when I was about fourteen I was fishing with my dad and brother in Bag Bay of Lake Chibougamau in northern Quebec and I saw a big pike take a muskrat that was swimming in front of a cattail patch.  A little while later my dad caught a 35 pound pike in that same area.  It was an amazing catch and we took Dad’s picture with the fish. I think my dad was planning to have that fish mounted and we put it on our steel stringer.  A little later there was some thrashing along the side of the boat and that fish tore off the stringer hook and swam away.

Wire leaders are almost a necessity since these fish with big teeth can chew through almost any spinning line. These fish will smash a top water plug, but most people fish them with spoons, spinner baits or stick baits in these shallow areas.  You have to be careful in your boat or canoe not to spook those pike since they will lie in very shallow water.

Early one morning while checking on the local loon population, I saw a fellow who was still fishing with live bait not far off the main channel in one of the Fulton Chain of Lakes.  I asked him how he was doing, and he said that he had caught a couple small pike about 5 pounds but during the winter right in this spot he had taken a 25 pound pike through the ice on a tip-up.

Fishing for pike in the Fulton Chain of Lakes is not just a summer sport, and many nice fish are taken during the winter through the ice using big live bait.  With some of the bait I’ve seen people use, you would have to shorten your flag length on the tip-up so the minnow wouldn’t trip the flag.

One day my son and I were ice fishing for lake trout off the east end of Alger Island.  We had caught a couple lacers weighing about 4 pounds and then one of his flags went up.  When he got there, all the line was gone off the reel and the fish was pulling on the tip-up.  He started hauling line and he said this is a big one – way more than your average sized northern pike.

This fish went by the hole several times, and it made many twenty foot runs away from the hole.  I saw it once as it went by the hole, and it was not a trout, but a big tiger muskellunge probably over 20 pounds.  It finally broke off the leader when we were trying to get it out of the hole.   My son said, “Dad we’re using steel leaders after this.” 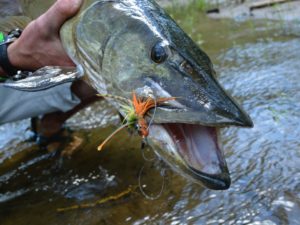 Gary Lee is a retired NYS Forest Ranger and licensed guide. He writes a column in the Weekly Adirondack and is co-author of Adirondack Birding.  He is an active volunteer with the Adirondack Cooperative Loon Program.