Landlocked Atlantic Salmon in the Adirondacks

The History of Landlocked Atlantic Salmon

In Colonial times, Atlantic salmon served as a staple food source for the Colonists. The Atlantic salmon ascended streams each fall in heavy numbers. Sadly, exploitation of this fragile species along with habitat alterations in the forms of dams and pollution put an end to the once prolific runs of Atlantic Salmon. Catching a true, ocean-dwelling Atlantic salmon is something that hasn’t happened in my lifetime in New York, although I’m certain that it may happen again one day.

Runs of landlocked Atlantic salmon in the Adirondacks can start as soon as mid-September and typically last up until late October or early November, with the peak action taking place during the month of October. The streams and rivers where the opportunities for fishing landlocked Atlantic salmon in the Adirondacks takes place all flow into Lake Champlain.

The three primary streams along Lake Champlain that receive runs of landlocked Atlantic salmon include the Ausable, Bouquet and Saranac Rivers. Each of them has some public fishing areas, although the logistics vary from stream to stream.

The best landlocked salmon fishing on the Ausable River system takes place close to the mouth and continues upstream for about two miles to the Route 9 bridge.  This is a flatwater area where a small boat is needed for the deeper pools, but only part of it is open for fishing from boats.

The launch site many use is the Ausable Point Campsite. The land along the river upstream of the bridge is privately owned. While there really isn’t any water available for wading anglers hoping to enjoy Ausable River fishing, anglers working streamers or spoons from a small boat catch their share of landlocked salmon each fall, and enjoy one of the best landlocked salmon fishing experiences out there.

A map of places for the best lower Ausable River Fishing is available through the New York State DEC at: http://www.dec.ny.gov/outdoor/31900.html. 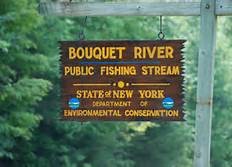 On the Bouquet River, the majority of fishing for landlocked Atlantic salmon is downstream of the dam and fishway at Willsboro on Route 22.  There is a nice pool and some pocket water below the dam that is fun to fish. Most folks reach the dam from Exit 33 on the Northway (Interstate 87). You can also launch at the cartop boat launch on School Street in Willsboro, which will provide access to the two miles of flatwater that lead to the mouth of the river. In the fall, salmon will get above the dam as well through the fishway, so don’t be afraid to try the pools above the dam on the Boquet River.

A map of the best landlocked salmon fishing areas on the Bouquet River is available through the New York State DEC at: 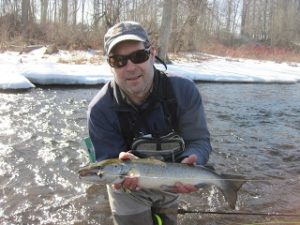 For Saranac River fishng, the best landlocked salmon fishing is right in the City of Plattsburgh on the three miles of the river downstream from the Imperial Dam. The landlocked salmon populations can be found anywhere in this section of the river, and part of the area can be fished by boat to get to the deeper water. There are also some streambank areas owned by the city that are accessible for Saranac River fishing as well.

A map of the places for Saranac River fishing is available through the New York State DEC at:

Pay careful attention to the legal requirements for fishing tackle as well. For example, there are sections of the Ausable and Saranac where fishing from boats is not permitted, and they are described in the Lake Champlain regulations found at the New York State Department of Environmental Conservation:

In addition to the regulations, flow conditions on the streams have a lot to do with how good the landlocked salmon fishing is going to be.  The Ausable and the Bouquet rise quickly after a rain event.  The Saranac tends to be a little more moderate in how it reacts to rainfall.  The best way to check the flows is to look at the USGS stream flow data website at http://waterdata.usgs.gov/nwis/rt.  Navigate to the New York page where you can get instant information on each of these streams. 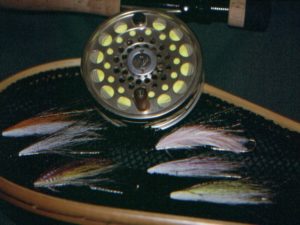 When the landlocked salmon first come into the streams on their spawning run, they are more active and will hit streamers as well as take small spoons or spinners.  If you are fishing near the mouth of one of the tributary rivers in a boat, troll tandem streamer patterns like the Gray Ghost, Black Ghost, Nine-three or smelt-imitation patterns.  My favorite streamer patterns for landlocked salmon and lake trout are three of Ed Bendl’s flies including the Lithuanian Prince, the Margo Smelt, and Ed’s Special.  Spoons and plugs that resemble smelt and are trolled near the surface also work for these fish species.

If you are wading a stream like the Bouquet River, streamers also work on fresh run fish because the fish are often quite aggressive when they enter a stream from the lake. Later on in their life cycle, once the landlocked salmon in the Adirondacks have been in the stream for awhile, most fish become much more finicky and harder to catch. Fly fishermen that are successful usually downsize to wet fly patterns or nymphs that they would use on any trout stream. Spin-tackle anglers also have to tone down their presentations.

For stream fishing, there are some ethics involved because these streams are not completely covered by public fishing rights.  It is very important to respect private property.  On streams and rivers where there are many anglers fishing a pool, the landlocked salmon fishing tradition is that you start at the head of the pool and work your way downstream.  Once you have fished the pool, you go back to the head of the pool and wait your turn again.  That way everyone gets a chance to fish within these landlocked salmon populations. 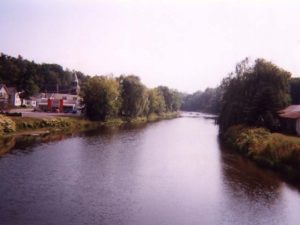 To get a real flavor for the hundreds of years of tradition in fishing for landlocked Atlantic salmon, you need to read some of the history of fishing for these species of salmon in the Adirondacks.  Fortunately, today we still have the chance to catch these landlocked Atlantic salmon in the fall, and can get a taste of what catching true Atlantics must have been like.

The restoration work for landlocked salmon in the Adirondacks continues to yield better and better results, and hopefully this will be an excellent season for these great fish!  Just maybe, someday their ocean bound cousins, the true ocean dwelling Atlantic salmon will return to our rivers as well.