If you’re an avid salmon fisherman, you may already know that New York State offers some of the best freshwater salmon fishing in the country. Anglers can expect to catch a variety of fish including pacific salmon varieties like chinook salmon, coho salmon, pink salmon, as well as landlocked Atlantic salmon while fishing in NY. With its many rivers and streams, there is plenty of opportunity for salmon fishing in New York.

Chinook salmon, also known as “king salmon”, are an especially important species of salmon in the Great Lakes. They were originally introduced to the area to supplement declining fish populations, and have since become a major part of freshwater salmon fishing in New York. The alewife population in the Great Lakes provided the perfect ecosystem for Chinooks, allowing them to thrive and become one of the most plentiful salmon species.

Pink salmon are the smallest species and usually weigh in at just a few pounds when full-grown. Chum salmon are also present in the waters of New York State, although they tend to be less abundant than other salmon species. Chinook salmon, which are the largest of the salmon species found in NY, usually weigh about 18 lbs. Although the Great Lakes record for a Chinook Salmon catch was 47 lbs. 13 oz., caught in the Salmon River.

King Salmon have a set 4-year life cycle. It’s almost unbelievable that these fish go from the size of your finger to 30+ pounds in such a short time!

Coho salmon tend to be smaller than chinooks. Mature coho salmon return to spawn at the age of 2, and average 8-10 pounds.

You can find pink salmon in Lake Ontario and Lake Erie, but they’re not caught very often. They’re originally from the Western US but have been stocked by management agencies of neighboring states and provinces. Near Hamilton Harbor in Western Lake Ontario, there are limited spawning runs for them.

The smallest of the Pacific salmon, pink salmon weigh an average of 3.5 to 5 pounds and are usually 20 to 25 inches long. Notable features include

Typically, landlocked Atlantic salmon are smaller than their oceanic counterparts. They usually run from 15” to 22”, but now and then a fish will reach 26” or more. They are known to get up to 5 lbs. 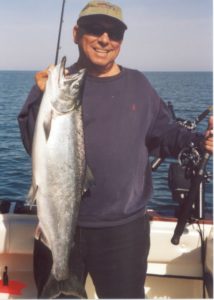 Salmon fishing season in New York State typically runs from April through November. During this time, salmon are actively migrating to freshwater streams and rivers to spawn, making them easier to catch.

Fall is an excellent time to go salmon fishing in New York! As the salmon move upstream from Lake Ontario anglers can take advantage of the abundance of salmon swimming through freshwater rivers and streams.

New York State is home to a diverse array of salmon habitats. Salmon can be found in both large and small freshwater lakes, rivers, and streams throughout the state.

The best places for salmon fishing are usually found along large river systems like the Hudson, Susquehanna, Niagara, Genesee, or Mohawk Rivers. These rivers provide ample salmon habitat and plenty of opportunity for salmon to spawn. Smaller rivers, creeks, and streams with deep pools provide salmon habitat, particularly during the summer season.

Freshwater salmon enjoy areas with moderate currents that provide oxygen-rich water. These habitats are ideal for freshwater salmon and the perfect spot to try your luck fishing! 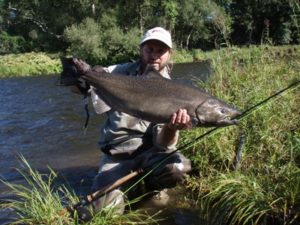 Both Chinook and Coho Salmon, migrate from Lake Erie each year between mid-March and early April to spawn in Lake Ontario. During this time they can be very aggressive – an excellent opportunity for fishermen to target these freshwater salmon.

During the late summer, after the salmon spawn, they stage at tributary mouths across the lake. During this time, anglers have increased their chances of finding freshwater salmon near shorelines and in shallow areas where baitfish congregate.

The salmon fishing season typically starts in early September and runs through early November, with the peak often occurring during the first two weeks of October. This is a great time for freshwater anglers to pursue their passion and catch a variety of freshwater salmon species from Lake Ontario.

5 of the best places to go salmon fishing in NYS

2. Salmon River – Located in Oswego County, the Salmon River is home to salmon and steelhead trout fishing. The river runs over 40 miles long and offers anglers a variety of techniques like drift fishing, trolling, or bobber fishing.

3. St. Lawrence River: Located in the northern region of the state, the St. Lawrence River runs from Lake Ontario to Quebec and provides an opportunity for salmon fish during the salmon run. With its deep, cold waters and plenty of access points, anglers can enjoy a successful day out on the river.

4. Genesee River – Located in western New York, the Genesee River is home to salmon fishing and brown trout fishing. The river runs for over 70 miles and offers easy access for anglers with plenty of places to fish from the shore or a boat.

5. Hudson River – This river offers excellent fishing opportunities for freshwater salmon, with the season typically beginning in late April and ending in November. Anglers can enjoy some of the best freshwater salmon fishing in New York here.

As they grow larger, freshwater salmon will begin to target flying insects such as mayflies, dragonflies, caddisflies, and midges.

As freshwater salmon reach adulthood, their diet shifts to smaller fish species, like minnows and smelt.

How to fish for salmon in NYS

1. Spin Casting: This is a great freshwater salmon fishing technique because it allows anglers to cast their lures farther into the water and cover more spots in one trip. It is especially helpful when trying to locate larger fish that may be hiding deeper in the water. Be sure to use a heavy-duty fishing rod and a quality spinning reel.

2. Fly Fishing: This freshwater salmon fishing technique can be difficult to master, but it is also very rewarding. It requires accuracy and skill to place the fly attractively into the water where salmon are likely to be hiding. The best type of fly rod for salmon is a 9′ 9-weight fast-action rod.

The 5 best Lures and Flies for Salmon 1. Spoons: This is a popular freshwater salmon fishing lure because of its ability to draw fish from deep in the water. Different sizes and colors can be used depending on the type of salmon being targeted, but all spoons should have a good action to entice fish.

2. Crankbaits: This freshwater salmon fishing lure can be used to target a variety of species. It has a tight, erratic action that simulates the motion of a fleeing baitfish and will draw even the wariest salmon into striking range.

3. Jigs: This freshwater salmon fishing lure is often used in combination with live or artificial bait. They are weighted to sink quickly and will often attract salmon searching for a meal.

4. Streamers: This freshwater salmon fishing fly can be used in freshwater or saltwater environments, as well as during different times of the year. Its bright colors, movements, and vibrations make it an effective tool for targeting salmon.

Whether you’re using lures or flies, having the right freshwater salmon fishing equipment is essential for success.

1. Roe: Roe is one of the most popular salmon baits used in New York State and is made from salmon eggs. It can be fished with a variety of rigs including drift fishing, trolling, and bobber fishing.

2. Worms: Worms are also a great bait for salmon fishing, and can be used on a variety of rigs.

3. Shrimp: Shrimp is another popular salmon bait due to its natural scent and flavor which attracts salmon to bite. It can be fished with drift fishing, trolling, and bobber fishing. 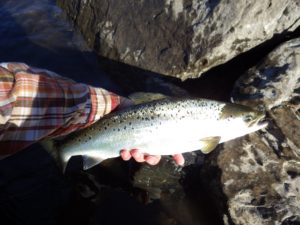 Salmon fishing in New York is regulated by the state’s Department of Environmental Conservation (DEC). Anglers trying for Atlantic Salmon are free to fish for this salmonoid all year round and may keep fish above 15″, with a daily limit of 3 fish.

Anglers aiming for Coho Salmon, and Chinook Salmon (as well as Brown Trout, Rainbow Trout including Steelhead), may also fish year round, but their catches must be a minimum of 12″ with a total daily limit for these species in any combination is 3.

As always, check out NYS official fishing regulations before hitting the water.