Brook Trout Restoring a Part of the Adirondack Heritage 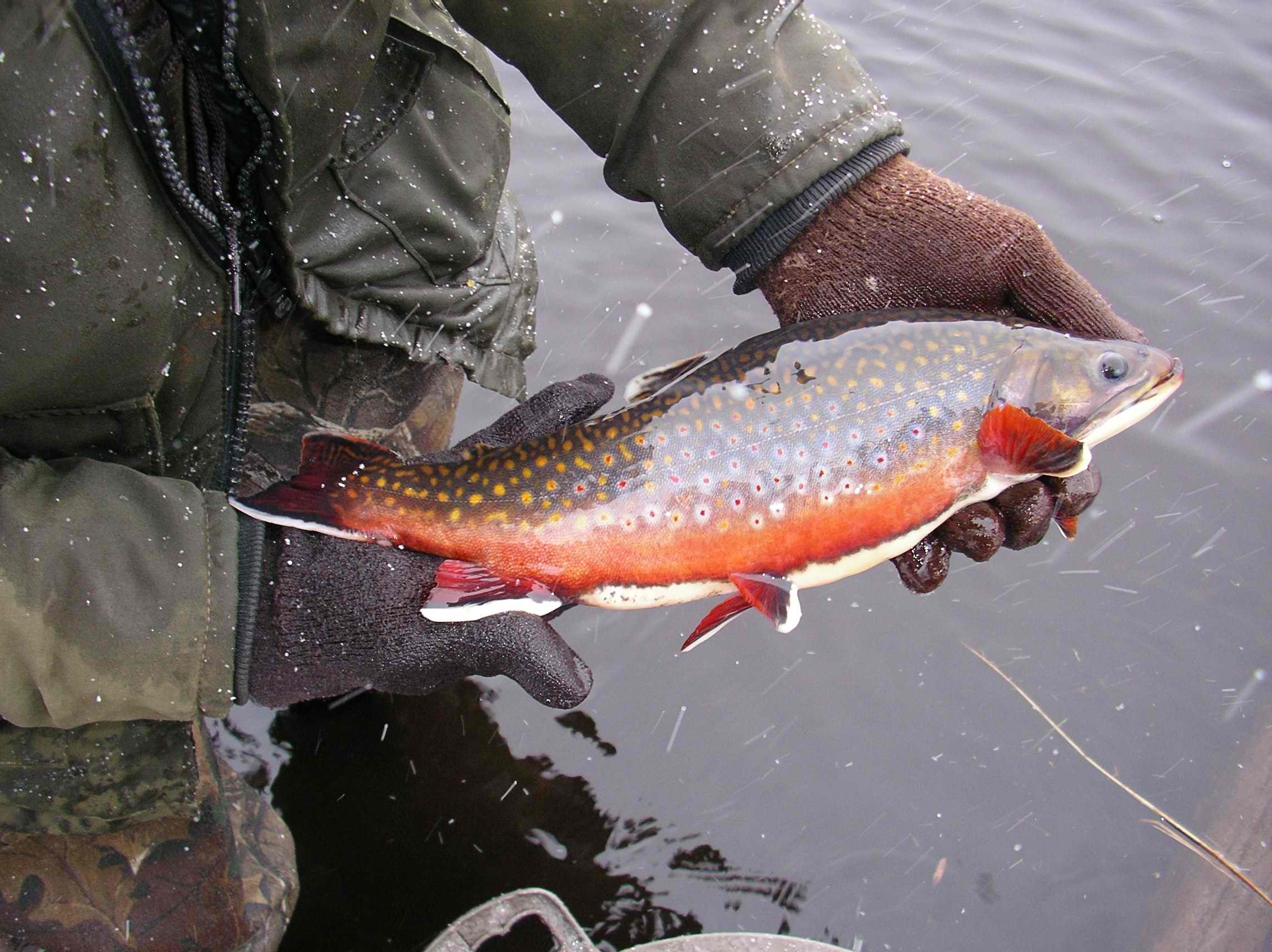 The 19,000 acres with a vast array of bodies of water from lakes to streams in the Saranac Lakes Wild Forest provide an example of the dramatic decline of the brook trout population historic to the Adirondacks. In the mid-1800s, 94 percent of these waters contained wild brook trout. By 2014 that figure had declined to only about 3 percent. The round whitefish has become so rare it is now listed as endangered in New York State. And, several Adirondack heritage strains of brook trout are either non-existent or limited to only a bodies of water.

The New York State Department of Environmental Conservation (DEC) has been restoring the wild brook trout and round whitefish populations to their original aquatic Adirondack habitats. The goal is for anglers to once again enjoy the unique experience of fishing for eastern brook trout populations in their aquatic habitat.

At the end of the last Ice Age, climatic conditions and waterfalls restricted fish movement upstream, and only a few fish species became established in Adirondack waters. The eastern brook trout and round whitefish became the dominate species in many Adirondack bodies of water. The eastern brook trout became the most widespread fish of the region.

When the water levels receded and waterfalls and chasms emerged, the eastern brook trout were sealed off and isolated from each other. The brook trout in the different bodies of water evolved separately, developing slightly different traits and characteristics. The original number of different varieties or strains of heritage brook trout has long been forgotten, but could have been in the dozens. Today, however, only a few different strains remain of the once abundant wild brook trout populations.

Several factors have contributed to the decline of the eastern brook trout over the past several decades. The first began in the mid-1800s with the increased demand for Adirondack timber. The clearing of forests and vegetation removed shade from streams and headwaters. This change in habitat conditions had a huge impact on wildlife. The lack of trees and understory vegetation led to an increase in water temperatures. Erosion of soil, previously held by the now-barren forests, caused stream siltation and subsequently a decrease in water quality. Warmer water temperature was a significant factor in the decline of the brook trout habitat, greatly diminishing the rate of brook trout survival, and spawning efforts. The log drives clogged rivers with timbers while tanneries and paper mills created pollution within fisheries watersheds. All of these factors greatly contributed to a significant decline in water quality within the brook trout aquatic habitat.

Introduction of Warm-Water and Domesticated Species

New York State’s past stocking programs have also been a contributing factor to the diminishing brook trout population of the Adirondacks. Both New York State and private stocking efforts were stocking millions of bass, perch and walleye in the Adirondack Park by the early part of the 20th century.  The spread of these warm-water species is alleged to be responsible for destroying the majority of the Adirondack brook trout fishery. The stocked population taking over habitat and using up natural resources which were historically needed by brook trout.

Another consequence of the New York State and private hatchery and stocking programs, was the stocking of domestic (hatchery raised) brook trout in waters that supported wild brook trout populations. While this might not seem to present a huge issue at first glance, this mixing of types of trout caused a hybridization of trout genetics. This hybridization between the domestic and wild brook trout compromised the ancient strains of Adirondack heritage brook trout.

What at the time seemed to be distant and unrelated industry in the Midwest, also took a toll on the Adirondack fishery. Acid-rain pollution within Adirondack watersheds was just one side effect that the Adirondacks were exposed to, in large part due to coal-burning power plants – a significant cause of the changing climate. This caused water quality to decline, as the pH level of many Adirondack waters became too acidic for brook trout to survive.

In more recent years, the primary decline of what remains of the brook trout fishery is the result of illegal stocking and the use of live bait fish. Individuals will remove fish from one body of water and release it in another. Anglers using live bait fish will often toss them in a lake when done fishing for the day or may accidentally spill them rather than bring the bait fish back out with them. Brook trout angling success has declined in many of the locations that were previously reclaimed as the result of this unauthorized introduction of non-natives, including bait fish.

Some of the problems the eastern brook trout have faced over the decades no longer exist. Other problems are being addressed today.  The use of best management practices, has allowed forests and understory vegetation to grow back, shading the streams and keeping them cooler. The return of healthy forests has decreased runoff and erosion, helping to limit down stream siltation. Anglers can no longer take long stringers home to brag about the many brook trout caught within the species native range.

Today such catches would not only be considered unethical but illegal. Regulations have decreased the daily creel limit and on some bodies of water have restricted fishing to catch and release only. DEC’s stocking procedures have changed from decades ago. This includes shifting away from stocking hatchery brook trout in waters that support naturally reproducing populations, including spawning grounds. This improves young brook trout survival rates as well as the survival of brook trout eggs within their native range.

The Federal Clean Air Act has led to a reduction in acid-rain pollution as well as many other environmental issues caused by the changing climate which affect the trout population as well as other wildlife habitat and natural resources found within the Adirondacks. Unfortunately acid-rain had already affected the pH of many bodies of water within historic native range of the wild brook trout. To solve the pH problem with lakes and streams which had become too acidic, state helicopters drop tons of powered limestone on the lakes to neutralize the water’s ph making the waters more suitable for brook trout habitat.

Special regulations have been established that restrict the use of live bait fish in certain bodies of water and prohibit the introduction of any species in Adirondack waters without a permit. DEC manages brood stock waters for the round whitefish and heritage strains of brook trout for stocking. Barrier dams to block the further spread of non-natives are being constructed and maintained. Lastly, efforts are underway to eradicate invasives from certain bodies of water and restock with heritage brook trout or round whitefish. 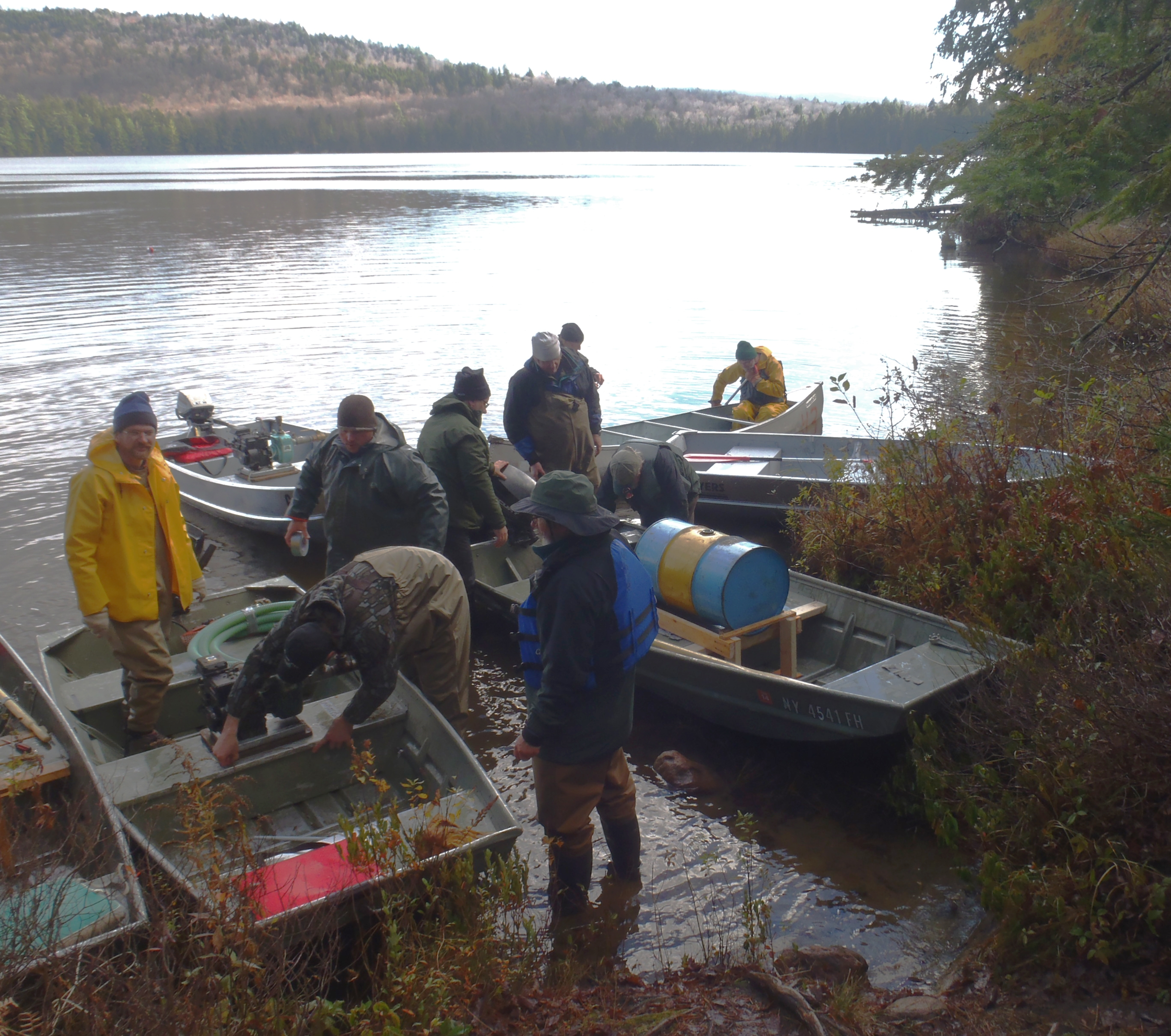 This eradication of non-natives from a body of water is called “reclamation.” When a pond is reclaimed, a controlled amount of rotenone is applied to the water to kill the fish. The pond is then restocked with brook trout. Through this procedure, the ecosystem can recover from the effects the non-natives have had on the trout habitat and return to a historic, original trout community.

Rotenone as a Reclamation tool 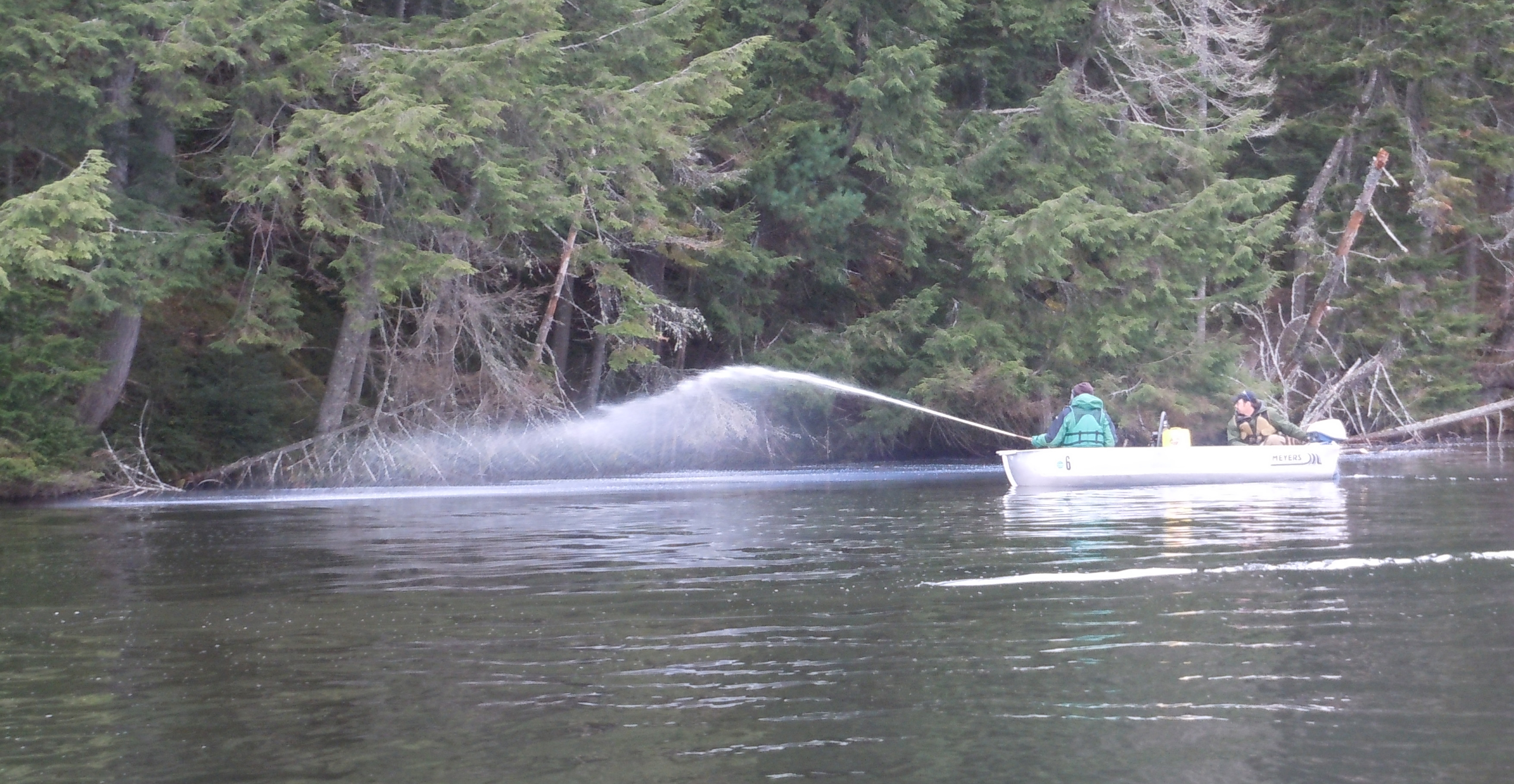 Rotenone is extracted from the root of the derris plant in South America. This root has been used for hundreds of years by aboriginal people to capture fish for eating. Rotenone is both safe and effective. It degrades to carbon dioxide and water and has minimal impact on non-target species. It is safe for mammals, birds, reptiles and amphibians too. They’re not affected by contact with Rotenone or by eating fish containing the chemical.

Most bodies of water in the Adirondacks are not good candidates for reclamation due to their, type and percentage of wetlands, and the lack of a suitable barrier to keep non-natives from returning to the habitat in question.

Pushback from the Environmental Community STOPPED

In the past, some environmental activists have opposed New York State’s efforts to reclaim the waters of the Adirondacks.  In 1991 individuals from the environmental activist group Earth First disrupted the reclaiming of Little Green Pond by demonstrating from shore and by floating on inflatable animals in the middle of the lake for six hours. The group was protesting in an effort to protect against the state poisoning the habitat with Rotenone. 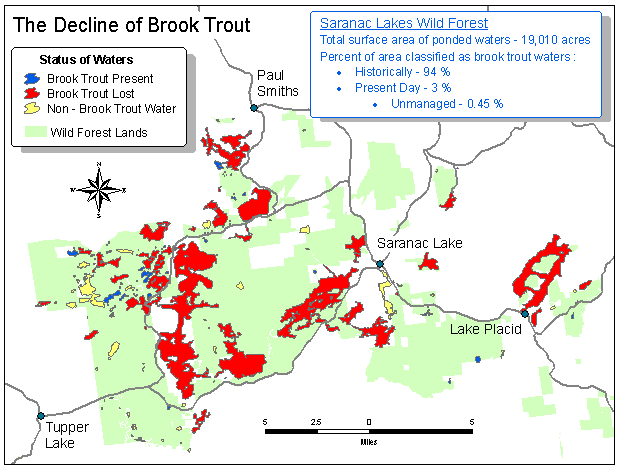 DEC records show that pond reclamation dates back as early as 1951 when Huntley Pond, Rock Pond and Jockeybush Lake were reclaimed. In 2013, non-natives were eradicated in Lower Sargent Pond in Hamilton County. As an abundant population of largemouth bass in the pond increased, the brook trout numbers severely declined within the habitat. In 2012, no young brook trout were found in the lake. The primary cause of the collapse of the brook trout population was attributed to illegal stocking and the use of live bait fish. The pond was stocked in 2015 with trout to reestablish the naturally reproducing native brook trout fishery that had existed previously within the habitat.

Partnerships with the DEC

The eradication of non-natives followed by restocking with native brook trout is a key component of DEC’s on-going Brook Trout Restoration Program. DEC is also a partner in the Eastern Brook Trout Joint Venture (http://easternbrooktrout.org/) which is working to protect, restore and enhance brook trout populations and habitat across their native range.

Rob Fiorentino of Region 5 Fisheries staff explained that whenever possible they try to re-introduce the previous strain of brook trout into the population, or at least as genetically close a strain as possible to the heritage trout species. In some cases they are stocking a hybrid strain of Adirondack brook trout crossed with the Canadian Temistamie strain. The Temistamie strain is a hardier strain that does well both in the hatcheries and in the wild. It also tends to be a larger trout. 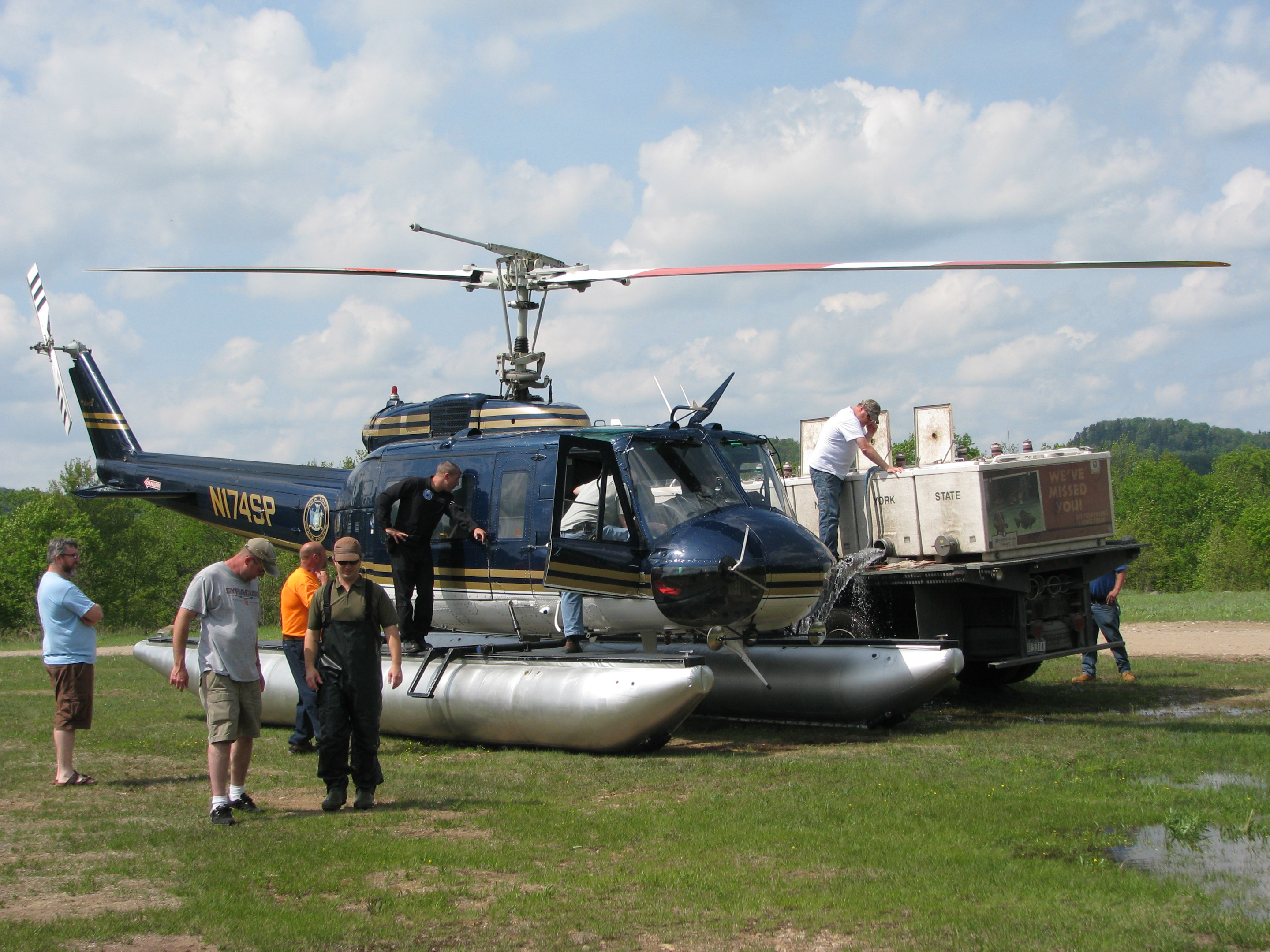 Fiorentino said that the goal of the DEC is to restore and protect native brook trout populations as much as possible. Part of that restoration effort involves studying waters and trying not to overstock ponds. By putting fish in at a good level it will promote growth of the brook trout and produce larger fish. Their goal is to eventually have natural spawning of the trout population occur.

DEC’s Regional Director Robert Stegemann sums up the agency’s goals with brook trout by stating that “Native brook trout populations have been significantly reduced in the Adirondacks and other areas throughout the east, but we are committed to restoring these populations in local waters. This tremendous coordinated effort will ensure the continued existence of a natural aquatic community and provide a high quality wilderness fishing experience for anglers.”

Wayne Brewer is the retired Director of Law Enforcement for the NYS DEC.  He is the author of a fish and game cookbook Enjoying Nature’s Bounty and a freelance writer for several publications.