An 8 ½ foot downrigger rod is doubled in half at the transom of a boat working the 150 foot contour in eastern Lake Ontario. At first glance it could be a variety of cold water species tugging on the line.  The line counter on the Okuma Convector reads 175 feet and this big fish is struggling to stay near the bottom. After all, the cold temperatures it prefers are located there. A ten minute see-saw battle ensues and finally our fisherman gets to see the quarry that took his offering. This time it’s a giant lake trout that tips the scale at just over 20 pounds and is nearly 38 inches in length. What fisherman can’t get jacked-up over that? Henderson Harbor is the base for this type of fishing activity and the good news is that it happens here all season long. Here’s where and how to tangle with “Giant Lakers”. 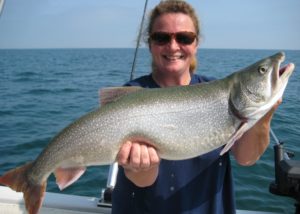 There was a time in the 1980s when anglers working the shoreline south of Henderson Harbor would connect on lake trout is shallow water. It was often difficult to target brown trout with so many lake trout competing in the same waters. Years ago, lake trout strains that frequented skinny water during spring fishing were discontinued and anglers no longer fished the lake trout in these areas.  Over the last several years, some lake trout have begun to reappear in the shallow waters during the spring fishery.

Lake trout love water temperatures in the low to mid 40’s and many veteran anglers will argue that they are the toughest fish that swims in these temperatures. Body baits and spoon presentations are the best lures trolled from planer board combinations during this period. Cover lots of water at higher trolling speeds to present baits to the largest volumes of fish. Lakers in colder temperatures are super aggressive and it’s not uncommon for them to chase down baits that are trolled in excess of 3 knots.  Look for areas of disturbance for the best action on spring lakers. River or stream estuaries will spill turbid waters into Lake Ontario, providing the necessary cover for predator fish to hunt successfully. The aquatic organisms suspended in this flow are also attractive to a multitude of baitfish. When the table is set, you can bank on lakers taking advantage of the smorgasbord.

Shoreline lakers are still not as prevalent as brown trout in shallow water but they can provide an exciting alternative in spring fishing.

The structure of Lake Ontario’s Shipping Lanes has long been noted for its production of king salmon during the month of July but what most anglers don’t realize is that it’s the number one spot to be during May and June for great lake trout action. It is always a safe bet to target lakers along the steep south edge of the Shipping Lane wall. Throughout the spring and early summer, baitfish will stack along this southern edge. The same baitfish attract lake trout from all across the eastern basin plateau.  Concentration is a must when deep trolling along this steep edge as many anglers have lost terminal tackle to the steep edges of this underwater ravine.

Once on station, anglers should use electronics to probe the depths for lake trout. Generally lakers will be found from 90 ft. to 125 ft. along the contour of the wall. Fishermen should set up in deep water, pre-setting downriggers at the depth where lakers were viewed. It is much easier to pre-load riggers and then approach the wall at a shallow angle, presenting the baits in perfect position. When lakers are hooked, navigate off the wall while playing them over deep water. Once all fish are landed, riggers can be reset and the process can start again. A great LORAN position to start fishing from is 15871.0/60097.0. Most quality GPS units will convert these LORAN numbers to usable Lat/Lon. A SW to NE troll will keep fishermen in contact with the edge of the Shipping Lane.

Big lakers can be taken throughout the eastern basin from July through September but the “Finger” off Stony Point is a location that all lake trout fishermen should become familiar with. A great LORAN position for this region would be 15855.0/60155.0. This number corresponds to 137 feet of water and is located directly in front of the underwater plateau known as “The Finger”. This structure is a known haunt for big lake trout and will serve anglers well as a starting point for their summer fishing.

Slow trolling Cowbells and Spin-N-Glo combinations near bottom will connect anglers with the trout lurking there. Generally subsurface currents will dictate that anglers fish at speeds below 1.5 knots on the surface.  Remember, “Hog” lakers will expend little energy to feed during the doldrums of summer.  A slow-spinning bait offered just in front of their nose will sometimes trigger the correct response from a lethargic giant.

The Best Baits To

Lake Ontario’s tremendous salmon fishery often overshadows our remarkable lake trout fishery. There are some dedicated anglers that are once again looking to make the lake trout their primary quarry. I had the opportunity to speak with John Distaffen of Northern King Lures and he is seeing the same increased level of interest. Northern King has long been one of the top spoon producers for salmon fishing on Lake Ontario but interest in lake trout baits is growing. Distaffen notes that interest in quality lake trout gear has really ramped up over the last three years. Consequently, NK has come out with its own line of Northern King Lake Trolls or what we affectionately refer to as “Cowbells”.  These Lake Trolls feature five inch willow blades and a 30 inch leader with connection points at each end. These trolls are made in the U.S.A. with durable materials that hold up under heavy fishing pressure.  Distaffen states that, interest in this line-up has tripled over the last three years and the company now offers its trolls in a dozen different color schemes.  This is a huge benefit to a deep-troller like me who prefers to color coordinate their offerings.

Spin-N-Glo’s lack the shaking action of a Wobble Troll but their rotating wings seem just as productive. Spin-N-Glo’s come in enough colors to boggle your mind along with size variations to fit any fishing scenario. A common practice of eastern basin anglers is to combine Spin-N-Glo’s of different sizes and colors, creating their own custom trolling combinations. Number 4 and 2 hardened trebles will work best behind either of these baits. A big laker does not always take big bait, so quality hooks are the only thing that will keep you connected to a giant.

Catching a Monster in Lake Ontario

Many lake trout over 20 lbs. hit the docks of Henderson Harbor during the summer. One giant fish taken aboard Capt. Scott Lennox’s boat broke the 38 lb. mark a few years back. Lakers are a slow growing cold water species that can live to 60 years of age. There are plenty of big Lakers in Lake Ontario and the future is bright for hunting these trophies. Practice catch and release of the Giant lakers so that we can build the type of trophy fishery that all in North America envy. It’s time once again for the lake trout to take its position of prominence in Lake Ontario angling.